Please fill in your details to download the Table of Contents of this report for free. We also do customization of these reports so you can write to us at mi@fibre2fashion.com in case you need any other additional information.

In Bangladesh, the readymade garments (RMG) industry acts as a catalyst for the prosperity of the nation and its competitiveness in international RMG market. Any brand with the 'Made in Bangladesh' tag, is considered as a high value brand across the world.

Bangladesh has maintained a 6 per cent average of annual GDP growth rate with its limited resources. The RMG industry, with the biggest export earning capacity, has become a significant industry of the country. This sector accounted for 83 per cent of total export earnings of the country in MY 2017/18 which reached over $30.61 billion of exports in 2017/18 financial year.

Number of garment Factories in Bangladesh 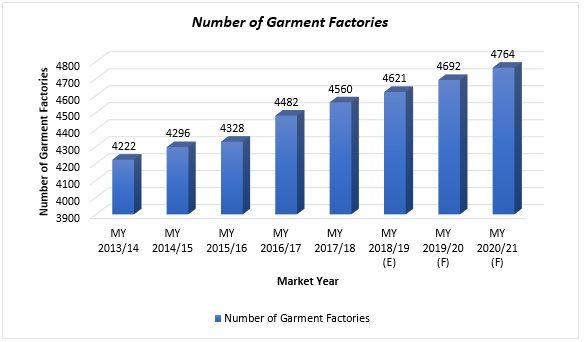 As a supply hub of the world, the Bangladesh garment industry is focusing on compliance and environmental sustainability. The count of green factories in Bangladesh is continuously increasing and has already exceeded the number 100. The cost of garment production has increased by 30 per cent in the country between 2014 and 2018. Also, the minimum wage of the garment workers has increased by 51 per cent since December 2018.

Despite the increase in the price of cotton, the main raw material for fabrics, the prices of Bangladeshi garments have started falling since the Rana Plaza disaster in April 2013.

The prices of Bangladeshi garments are still following a downward trend with increased cotton prices because the international retailers are not ready to pay a fair price to local manufacturers and exporters.

In Bangladesh, the prices of the cotton play a very significant role in the industry as the production of cotton garments is still high compared to production of garments by man-made fibre or viscose fibre. Approximately 90 per cent of the total Bangladeshi garment exports are cotton based. 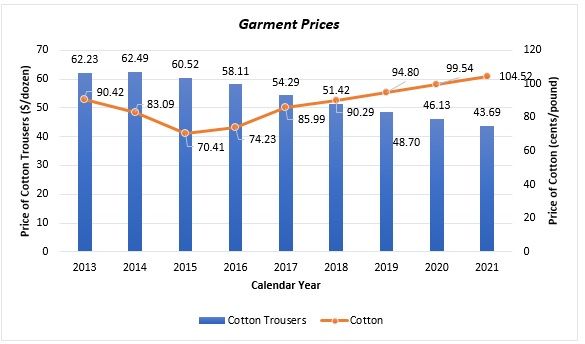 According to Bangladesh Garment Manufacturers and Exporters Association (BGMEA), the prices for EU and US have fallen by 3.64 per cent and 7 per cent respectively due to constant price pressure from brands and retailers as a result of volatile global consumption. 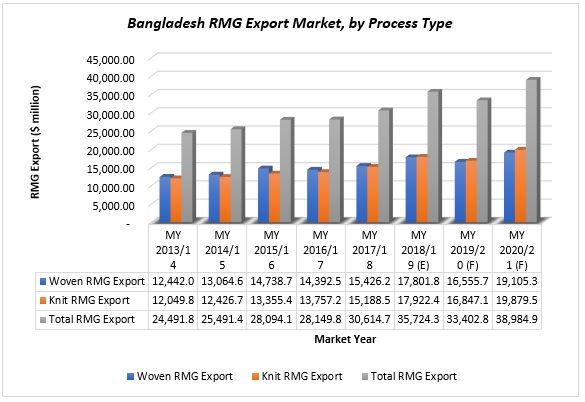 The major export destinations for Bangladesh garments are the US and the EU. But currently neither of these markets are in recession. However, the exports are expected to decline in MY 2019/20. The major reasons for decline in exports are falling global consumption and devalued currencies in major competitor countries.

Presently, non-traditional markets contribute approximately 15 to 16 per cent of total RMG export earnings. The RMG export in MY 2019/20 showed negative growth in non traditional markets due to trade tensions between China and US, and declining price trend of raw materials, especially cotton and yarn.

The markets other than US, Canada and EU are considered as non-traditional markets. It includes Chile, China, Japan, India, Australia, Brazil, Mexico, Turkey, South-Africa, Russia.

According to Export Promotion Bureau (EPB), in the early months of current fiscal year, China started importing from Bangladesh as the Chinese government has allowed duty-free access to over 5,000 Bangladeshi products. In case of India, Bangladeshi garment exports showed positive growth with international brands such as Zara and H&M. Also, the domestic market of India has grown with growth in number of fashion-conscious consumers. Bangladesh imports raw materials for garments such as cotton and machinery from India. The RMG exports to Chile also showed negative growth.

The ongoing US-China trade conflict has strongly supported garment exports from Bangladesh. The Chinese manufacturers have started shifting their business to other regions due to rise in wages and tariff rise by the US government. Bangladesh offers quality products at a lucrative price, hence global retailers landed there to take the advantage.

Shirts, trousers, jackets, t-shirts and sweaters have made significant contribution to the Bangladesh RMG exports. Trousers and t-shirts contributed for the major part of the total exports. Trousers and t-shirts contributed 27.85 per cent and 28.14 per cent respectively in the total Bangladesh RMG exports for MY 2018/19. Out of all the above garment categories, export of sweaters and jackets have increased with a high growth rate of 26.60 per cent and 23.62 per cent respectively from MY 2016/17 to MY 2018/19. 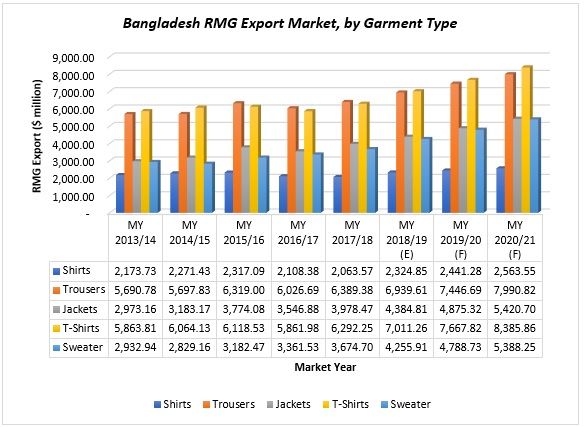 According to BGMEA, the technological upgradation and extended winter due to western climate change, has promoted the export earnings of sweater. Installation of new technology has improved quality of products as well as capacity which led to increase in work orders by global buyers. 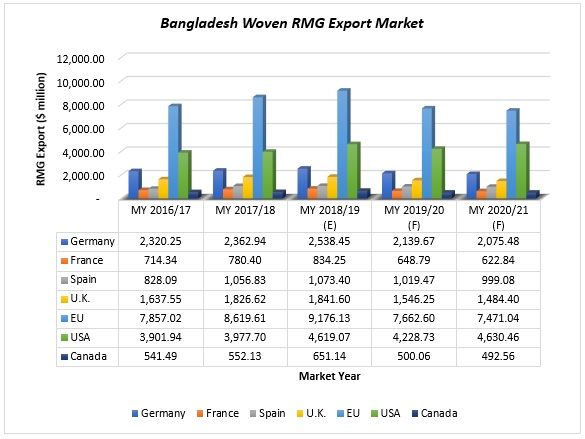 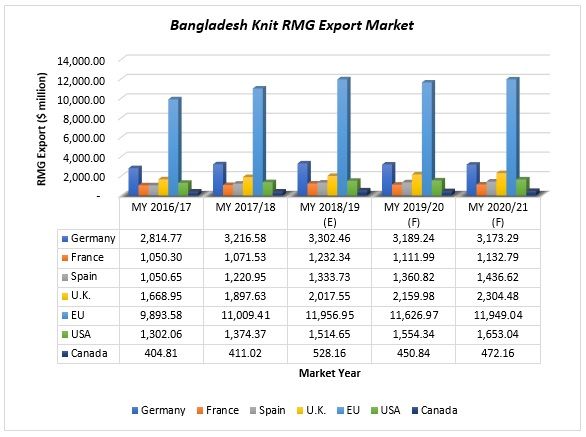 3). The government provides 4 per cent cash incentive to garment manufacturers which was set in 2018. Henceforth they have started to explore new destinations and markets.

As per the World Bank (WB) report, the high transportation cost in Bangladesh is a major cause of compromise for the competitiveness of the country's RMG sector. The price of garments in the country have increased by 35 per cent due to transportation mess. It includes congestion on roads and seaports, high logistics costs, inadequate infrastructure, one-sided logistics service markets, and fragmented governance.

The road transport accounted for 84 per cent in Bangladesh transport industry. Usually, seven-tonne trucks are used for transportation. The average cost of carrying per tonne per kilometre is $0.095, which is much higher than many other developing and developed countries such as US, France, Australia, India, and Pakistan.

The RMG industry in Bangladesh is adopting the 'Apparel 4.0' and undergoing a revolution which includes the digitisation of apparel production processes ranging from concept to post-retail. This revolution will enable the manufacturers to monitor and automate the entire production process with complete supply chain transparency.

Neighbouring countries of Bangladesh such as India, China and Vietnam are also rapidly implementing the Apparel 4.0 technologies in their factories. Raymond from India has started using the sewbot technology. Chinese garment manufacturers are introducing the smart clothing, augmented reality, and 3D printing in their factories. Vietnam has significantly developed Radio Frequency Identification Device (RFID), additive manufacturing and ERP.

This technology will enable the country to make the garment production cost effective and efficient. But it may cause a heavy job loss in the future as humans will be replaced by machines. According to the McKinsey Global Institute, approximately 800 million jobs could be lost worldwide due to automation by 2030. The garment sector of Bangladesh will be the most affected by Industry 4.0. A study by Government of Bangladesh predicts that around 60 per cent (5 million) of jobs will be lost in the next 15 years.

Possible Number of Job Loss by 2041 in RMG Sector

But as automation is majorly implemented by the big giants and as Bangladeshi RMG sector is majorly made up of small and medium-sized enterprises (SMEs), the SMEs are being worst hit by automation. For this reason, the government of Bangladesh is arranging for training and upskilling initiatives, especially for small factories.

* Please click on bar to drill down and up. 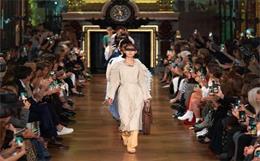 In October-November this year, pollution levels in Delhi-NCR reached alarming proportions with stubble burning by farmers in Punjab and Haryana being one of the prime reasons for the hazardous haze that hung...

Business, But Not As Usual

The way business processes work in this industry is in a flux. Two IT-related solutions-enterprise resource planning (ERP) and product lifecycle management (PLM)-lie at the core of such processes. We take a...

If you wish to reuse this content on web, print or any other form,
please seek for an official permission by writing to us on
editorial@fibre2fashion.com

Subscribe today and get the latest information on Textiles, Fashion, Apparel.